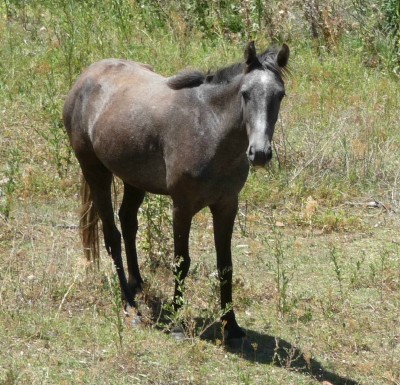 You are here: Home / News / Romany

Romany was surrendered to us as a 2yr old Brumby Filly. She was in very poor condition and full of worms. Her initial story saw her travel to Singleton in NSW as a foal at foot with her mum and several others from her herd out of Dorrigo national Park.

Sadly after a few months, the rest of her herd included her mother were sent to the Doggers. Although she had been around people, she had very little appropriate handling and did not lead or tie up. This is one smart little girl, she took to her education like a duck to water. Fortunately, Romany had no injuries so her recovery was predominantly injection of the old “wonder drug” – FEED. Romany was very quickly placed with Trudi on the Gold Coast.

Trudi has taken up the training and handling practices and is currently starting break Romany ( now called Tina) to saddle. Thanks to Trudi for the updated photo.

A note from Trudi –

Just wanted to let you know that Tina is going really really well.

I took her to a pony club last weekend for a hack day, just to get her used to being floated and going out and about and she just stood at the float and ate her hay, she was great. I have started the breaking process, I have her taking the bridle with no hassles. I am just going to take my time over the next couple of months and get her used to everything slowly. As soon as I get a new camera I will send you some updated photos of her. She looks great now that she is rugged, fed twice a day and washed/groomed all the time. 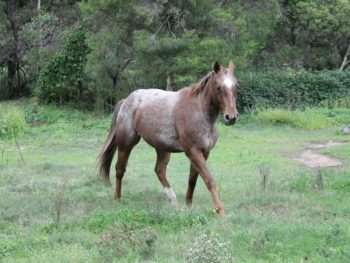